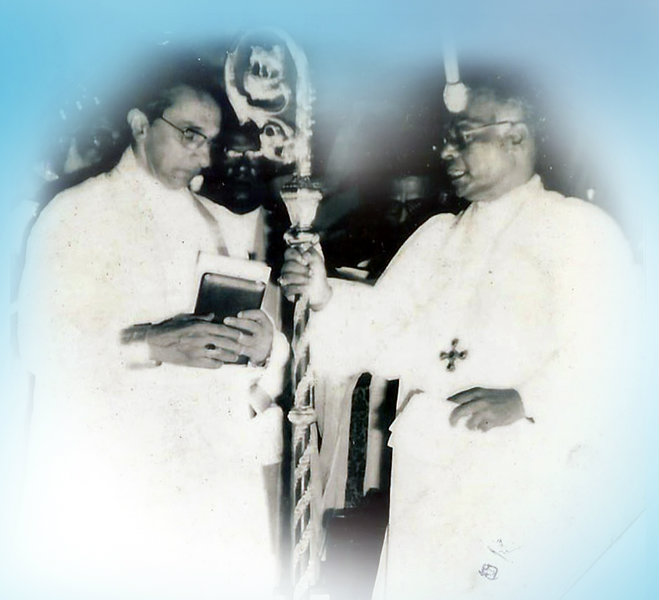 The legends of Church are emerged through vibrant interactions with believers and by leading a purpose driven life. Bishop Dr. M. C. Mani was once such legend. He traversed a path that was unheard as well as untouched. His work and charismatic leadership has opened innumerable avenues of work to serve mankind.

The legacies of Society are created with unprecedented tempo of  leaders who intervene with insightful ventures into the society with clear vision and mission. Clear Objectives and focal areas are identified and action plans to be set to stay true to vision and mission. We need to strengthen the bonds and relationships of  all members of society, irrespective of caste, creed and colour.

Bishop Mani Foundation is one such venture to continue the work in the avenues which our legends have created. We will live by their legacies  and use the linkages and leverages of social action, moulded with purposeful interactions with our congenial partners.

Bishop Mani foundation facilitates all inclusive and all encompassing ventures that carry the messages of help as well as coverage of the substance of Gospel. Our motto is  ” to become the hands and feet of Jesus “. Our vision, mission, objectives and focal areas are so aligned to uphold the essence of our motto.

Bishop Chacko Mani was born on 3rd July 1928 in Modayil family of Central Travancore.  His father was Dr. M.P. Chacko, a doctor working in Travancore Government Service and mother Mrs. Mary Chacko. Bishop had his schooling in various mission schools in Kerala and Tamil Nadu. He did his BA from Madras Christian College. While studying, he enjoyed life influenced by worthy things. But, after Jesus called him by his name to serve Jesus, things have changed for better.

Bishop Mani has worked as the president of the Healing Ministry & Mission and Evangelization Department of CSI Synod and secretary for Diocesan Council for three consecutive terms. While he served as corporate schools’ manager of the Diocese, his team has revived more than 200 schools, of which many were more than a century old. As an ecumenical leader, he served as the Secretary of Nilackal Ecumenical Trust for more than 10 years. During his period as bishop, the Madhya Kerala diocese was bifurcated to form East Kerala Diocese for the development of hilly areas and undeveloped communities.

Bishop has taken up large scale developmental activities for the weaker sections of the community. Bishop was called as the ‘Father of the Poor’ due to his concern and commitment for the social upliftment of poor and weaker sections. Bishop Mani was a champion in inter faith dialogue and ecumenical vigil. He redefined the term charity by exhibiting Christian love and by elaborating the vistas of social services. Bishop Mani also initiated a galaxy of secular endeavours.

After 12 years of eminent and unparalleled leadership, his Lordship retired from active service on 3rd July 1993 and led a very simple life dedicated exclusively for the marginalized and downtrodden. He died on 20th October 2015 and was laid rest at Holy Trinity Cathedral Kottayam.